Last weekend I did something a little different… I joined a Women’s March! Reclaim the Night is a night for women to come together and protest against street harassment and all forms of men’s violence against women.

As hundreds of women walked through the streets (led by an incredible Samba Band) we stopped traffic and turned heads as people came out of their houses to watch what we were doing. Many of us had banners with slogans like “my dress does not mean yes” and knickers on sticks with “this is not consent”. As people stared, they realised what we were doing and hopefully why we were doing it. Men and women clapped us in the streets and the response was overwhelming. It was an extremely empowering evening and encouraged women no matter their sex, race or social status to keep pushing back against violence.

We are currently promoting the White Ribbon Campaign which is 16 days of activism to take a stand against violence to women and girls. We have 3 upcoming events where you can come and purchase a white ribbon and help raise awareness:

My dream is that one day we will not have to protest and campaign against such things, that men and women will be equal and not fight for power against each other but until that day comes, I will keep marching on in my day to day life and encourage you to do the same. 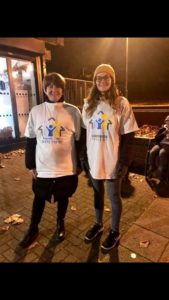