From historic patriarchy to toxic shame. Why do men become domestic abusers?

There are two significant factors that contribute to men’s abuse of women.

Firstly, that society has historically been patriarchal and remains so today – this confers on men the expectation of exerting power and control over women. Abuse is used to maintain this power and control that men see as their entitlement. Secondly – damaging childhoods involving poor parenting and trauma sometimes lead to narcissistic behaviours and lack of empathy; characteristics associated with abuse in intimate relationships later in life.

Society tells us that men are more important than women, more deserving of wealth, privilege, power, status, and success.

Hundreds of years of patriarchy has laid a solid foundation for this belief. There are countless historical references that can be made to support this notion such as the delay in women getting the vote (1925 for over 21s). We might imagine that we have progressed since then, and although many significant improvements have been made, we are still very much influenced by our history, and there are still many inequalities that remain today.

Historically, women have been afforded so few rights in law, they have effectively been considered the property of men, the property of first their father and then their husband.

Though things have progressed, we still have practices in place today that reinforce the belief this is still the case. In traditional weddings, women are ‘given away’ by their fathers in a symbolic transfer of ownership. Also in traditional marriage ceremonies, women will often promise to ‘obey’ her husband, and will take her husband’s name.

These practices undermine women and perpetuate the belief a wife is the property of her husband, and she should do as she is told by him. Shockingly, until 1992, forced sexual activity and rape were not unlawful within marriage, conferring on married men the right to sexually abuse their wives without regard to any question of consent – her body was his to do with as he pleased.

Despite the law now being changed to make marital rape unlawful, it takes time for beliefs and behaviour to change. A report by ‘End Violence Against Women Coalition’ found that a quarter of all adults believe sex without consent in long term relationships is not rape. Sadly, we still live in a society that demands women’s subordination to men on every level.

Despite women now attaining better educational qualifications than men, it is still men who secure a disproportionate number of top jobs. Even when employed in the same role, men will often be paid more – the gender pay gap remains an issue and demonstrates the continued inequality of opportunity that women have always been subjected to. Society still upholds the notion of men’s superiority over women, that it is men who should hold the power and control.

Women are also commonly ridiculed and are frequently the butt of sexist and misogynistic jokes. Jokes that sexually humiliate and suggest ignorance, stupidity, subservience, and sexual availability are still often made against women: 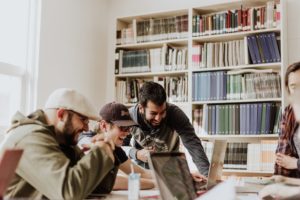 It’s not just in jokes, women are also denigrated and humiliated in the media, films and the music industry too:

“Slut you think I won’t choke no whore till the vocal cords don’t work in her throat no more” (Eminem).

“We have to constantly critique imperialist white supremacist patriarchal culture because it is normalised by mass media and rendered unproblematic.” Bell Hooks

It might be more subtle than in years past, but there is evidence throughout society that reinforces the notion of male supremacy. When society reinforces the belief that men are entitled to power and control over women, men feel their abuse of women is justified. Women will also buy into this belief and accept subservience. Women may also socialise their children with these expectations and role model submissiveness in their intimate relationships.

Although worryingly common, of course not all men become domestic abusers despite being raised in this male dominated society.

A second and very significant risk factor appears to be a traumatic childhood which features attachment disruption. 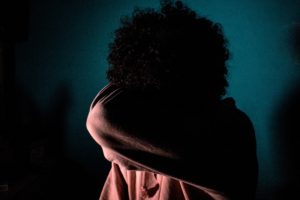 For healthy development, children require a safe emotional connection with a primary caregiver with caregiving being responsive to the child’s needs. Secure childhood attachments lead to healthy cognitive, social and emotional development. These children will develop empathy, have a capacity for love and be able to control aggressive impulses.

Childhood attachment can be disrupted in a number of circumstances – childhood abuse, both physical and emotional, neglect and lack of responsiveness, and the sudden loss of a close attachment bond. Children traumatised in this manner may lack the ability to feel love and empathy, they may have poor self-esteem, narcissistic personality traits and be unable to form secure attachments later in life. Not surprisingly, domestic abusers have very often suffered traumatic childhoods, often characterised by a lack of secure attachment.

Toxic shame is very different from healthy shame which is short lived and helps teach us right from wrong. 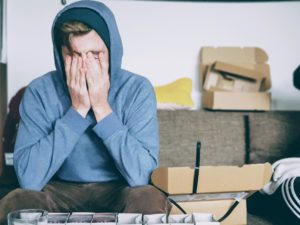 Toxic shame is felt long-term and shamed people feel inferior and exposed. Because the toxic shame is so painful and takes people back to childhood trauma, they often replace the shame with anger, a less triggering emotion. People who behave in an angry manner when they feel shamed will see shameful experiences as caused externally – if they assault their partner, rather than feeling guilt for behaving in that way, they are likely to blame their partner for causing them to resort to assault.

If they verbally abuse their partner, they will likely believe she deserved it. If they make a mistake, they will not acknowledge blame but will blame someone else. These people will be hypersensitive to personal attack and will hide their shame with controlling tactics.

Abusive behaviour is a major psychological defence to a host of insecurities caused by bad parenting and trauma in childhood. Being angry, violent and controlling can mask desperate insecurity. Despite their bravado and apparent sense of self-importance, most abusive men feel broken, unworthy and deeply unhappy beneath their angry and controlling facades.

“Adulthood is an attempt to become the antithesis of the wounded child within us.” Stewart Stafford

Understanding that an abusive partner has been damaged by societal influences, dysfunctional parenting or past trauma can have a liberating effect on the survivor. She may finally understand that she really wasn’t to blame for his behaviour despite having been repeatedly told she was. But there is a danger that this knowledge may elicit empathy in some women who may feel motivated to try harder to help him to overcome his demons. This is very often not possible if the trauma was intense and the coping strategies deep rooted.

Whether acting out societal ideals of what is expected of them or behaving in order to protect their vulnerable and fragile emotions, exerting power and control over their intimate partners will help abusive men to achieve their objectives. When they dominate, undermine, blame, ridicule, belittle, degrade, assault, and project they will experience a sense of control they so badly need. If their partner shows signs of resisting their controlling tactics, the abuse will often escalate in an effort to re-establish control.

“A controlled child also learns that the default human approach to interaction is forcing, threatening, or manipulating others”. Darius Cikanavicius.

For whatever reason men feel the need to acquire it, the quest for power and control is at the route of all domestically abusive behaviours.

The actions of an abuser will be deliberate, controlled and targeted. If the issue were anger management and lack of impulse control, these men would assault and abuse colleagues and friends too, they tend not to. There is a delicate balance to abusive behaviour, it needs to be well managed, monitored and finely turned if it’s to work effectively. Very often, especially with more covert forms of abuse such as coercive control, men will try hard to keep their abuse subtle enough that it is not picked up on and challenged – just under the radar of conscious awareness so women imagine they’re slowly losing their minds and don’t understand why. This is why it’s so imperative to understand the reasons for and the mechanics of abuse in order to survive it well.

So long as society sanctions patriarchy and children suffer trauma and neglect, domestic abuse will thrive.

If any of this sounds familiar to you, you live in Broxtowe, Nottingham, and you think you would benefit from our help, please don’t hesitate to give us a call on 01773 719111 or email enquiries@broxtowewp.org