One of Eastwood’s most treasured performers, drag artist Mark Preston, has brought a Christmas smile to many, after he raised hundreds of pounds for BWP at one his famous fundraising events.

Mark Preston, who performs as Zandra across Nottingham, donated £500 to BWP from his festive fundraiser on 10 December.

A sold- out audience were entertained late into the evening by Zandra, Mark’s brother-in-law Kev Carrington as Harry Hill as well as stand out performances from drag artists Glittery Gin, Sharon Swallowz, Eve Waye, Skylar and Shunta Bothered and singer Eleda Starr at the festive event. 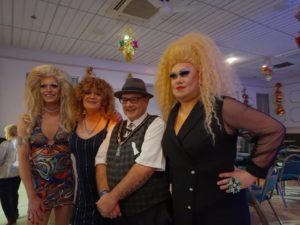 Mark (pictured third from the right) chose to fundraise for local charity BWP earlier this year after learning that they had supported one of his friends, when she was a victim of Domestic Abuse.

Councillor Richard MacRae  (pictured second from right) with who went along to the evening, said: “Mark and his team put in a lot of work, time, and effort to make the show a great night to remember.

“Not only a great evening supporting the causes, but such a great family of people who absolutely spoilt us. We had so much fun. Thank you all.”

Mark added: “We were happy that so many people joined us at the event, while we raised money for this amazing local charity.”

Colette Byrne, CEO at BWP said: “We would like to thank Zandra, all of the other acts for so kindly supporting us this year, and at this incredible event. Every penny they raised will enable us to make a huge difference to women and families experiencing Domestic Abuse as we head into 2022.”